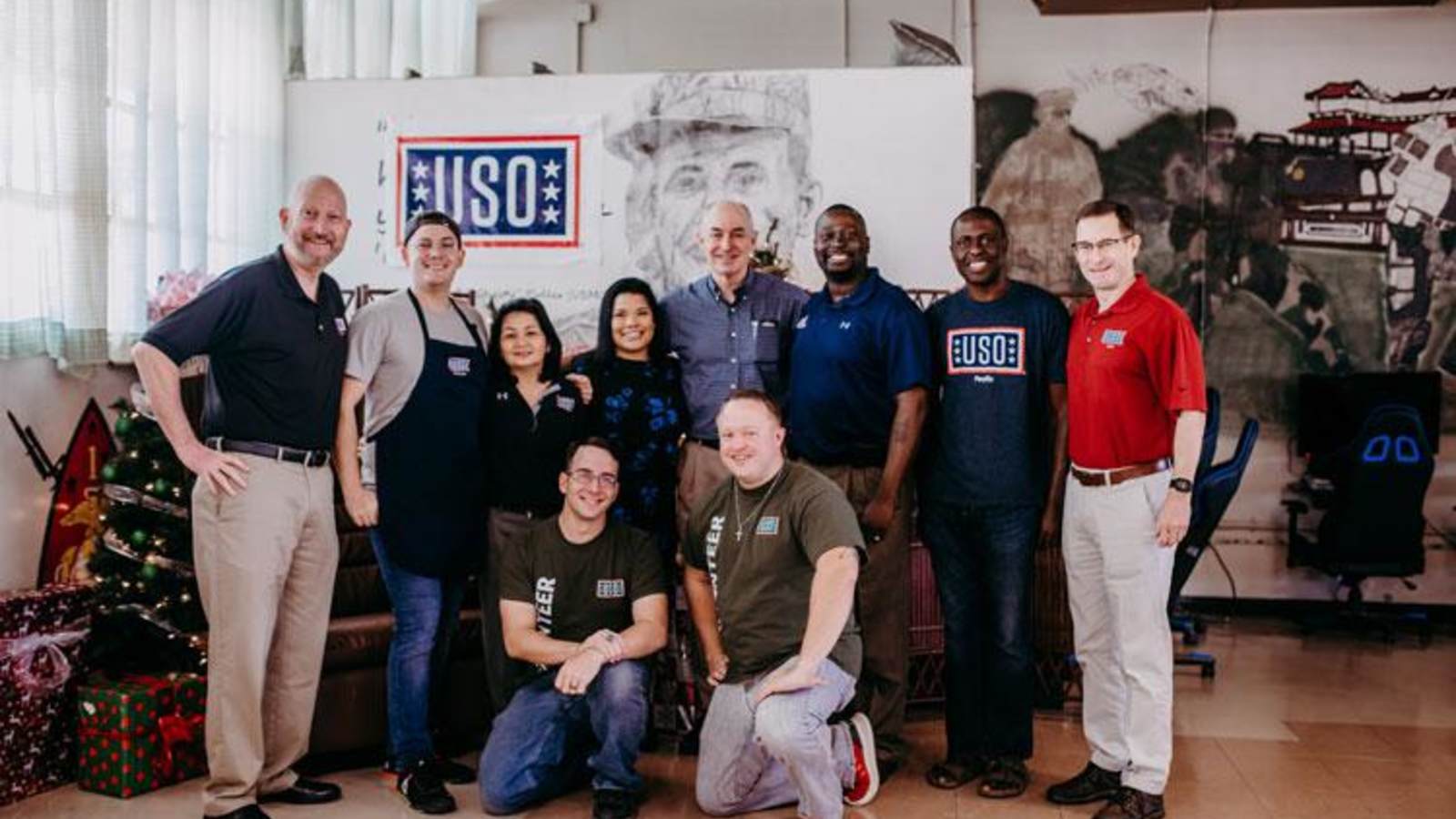 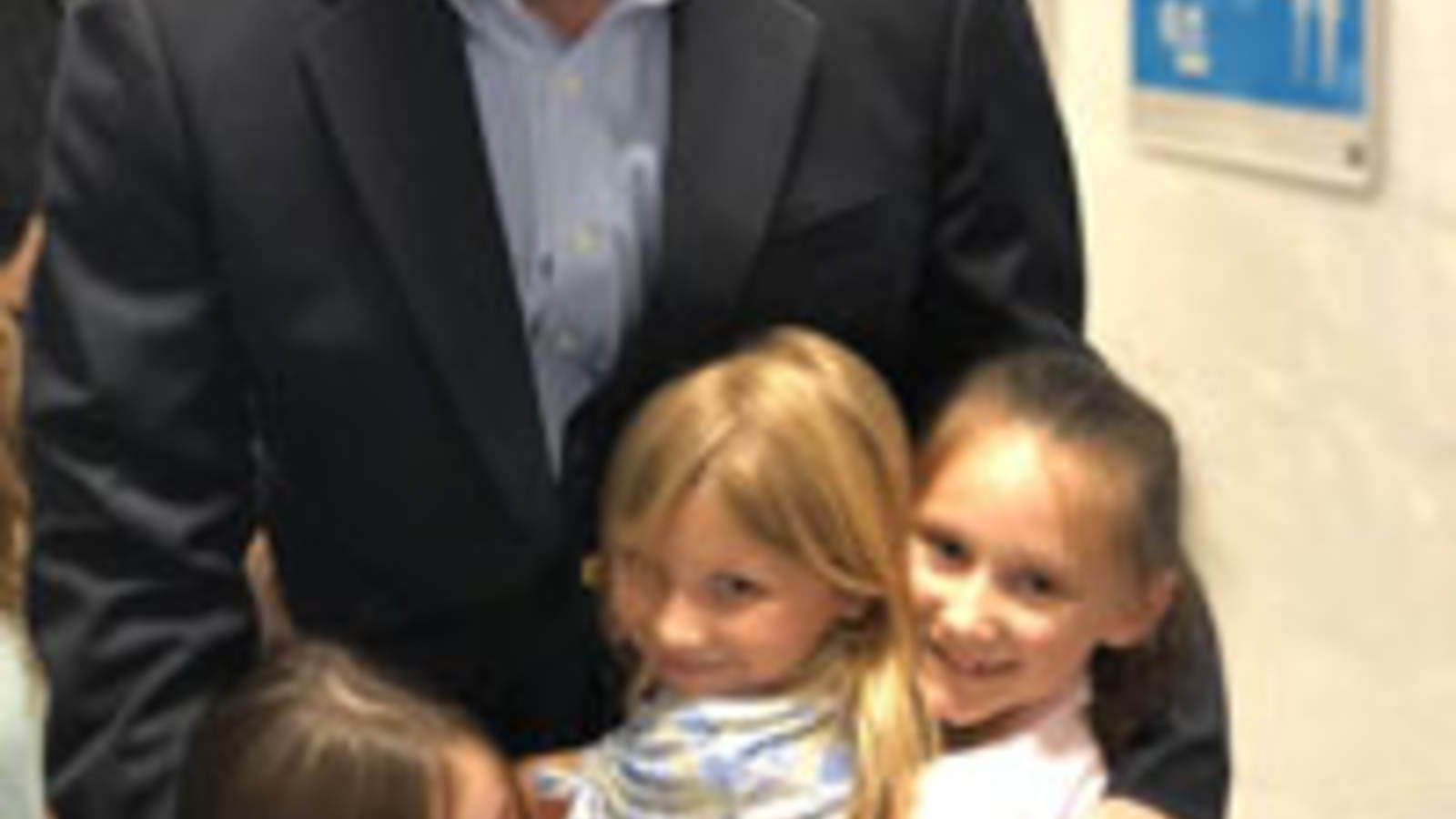 12.20.2019 Kadena Air Base, OKINAWA, Japan – USO CEO and president J.D. Crouch and his wife Kristin who were visiting Okinawa on a regionwide tour from Arlington, Virginia, joined in the holiday festivities and conversations of several events that focused on the military spouse. The president leads more than 300 USO staff members and 30,000 volunteers as they strive to connect America’s service members to family, home, and country throughout their service to the nation. JD Quote The average military spouse moves 8-12 times in the span of a 20-year military career, which often results in starting over in each new location and dealing with the struggle of meeting new people, sustaining meaningful employment, and feeling a sense of community where they live. The USO has supported military spouses for many years and in 2016 launched a worldwide initiative focusing on programs such as USO Military Spouse Networking and USO Coffee Connections, that have been strengthening and empowering military spouses by connecting them to their social, professional, and community networks. The USO launched USO Coffee Connections which allow spouses to relax in a comfortable setting, share advice, learn about local events, and make new friends over a cup of coffee and refreshments. Spouses are encouraged to come as they are or bring other military spouses with them to join in on the friendly conversation. In 2019 USO Kadena hosted two Coffee Connections for a total of 28 spouses. It is a new program to USO Kadena, but the center manager said they have intentions to host the program once per month in 2020. An average of 25 participants per program are expected as a base for this program. However, USO Kadena is not limited on space and can accommodate 100 participants if the community demand is there. “Our goal for the program is to create connections on the island through the vast number of military spouses present among all branches,” Lisa Wease, USO Kadena Center Manager, said. “Okinawa can be a great overseas tour, but spouses can really benefit from a great network of connections to make it happen. The intent is for Coffee Connection to initiate great connections through new friendships in a fun and comfortable environment.” USO Hansen is planning to host four Coffee Connections in 2020. Although, Camp Hansen lacks family housing there are many families who live off base in the vicinity and enjoy the many benefits of USO Hansen. “The biggest benefit of all for coffee connections is being able to give spouses a space where they feel connected and included,” Jamie Webb, USO Hansen Center Operations Manager, said. “With the transition to Okinawa being difficult for some, USO Hansen’s vision is to create a space where spouses can be themselves and learn about Okinawa and military life.”

USO Camp Foster has plans for six Coffee Connection in 2020 with many fun activities and giveaways. “There is a large military spouse community on Camp Foster,” Angela Tom, USO Foster Center Manager, said. “We hope to use this program to help build connections that foster personal and professional networks. This program will provide those men and women an opportunity to meet other spouses while participating in an activity, whether it’s resume building or a spa night!” You can join the USO as they host a small gathering for military spouses to connect with each other while enjoying a cup of coffee. This is a great way to network, share advice, discuss local events, and meet new friends! All spouses are welcome to attend. Find out dates and times for the next USO Coffee Connection near you by taking a look at OkinawaUSO.org or checking out one of the six USO Facebook pages on Okinawa. Just find the one near you.