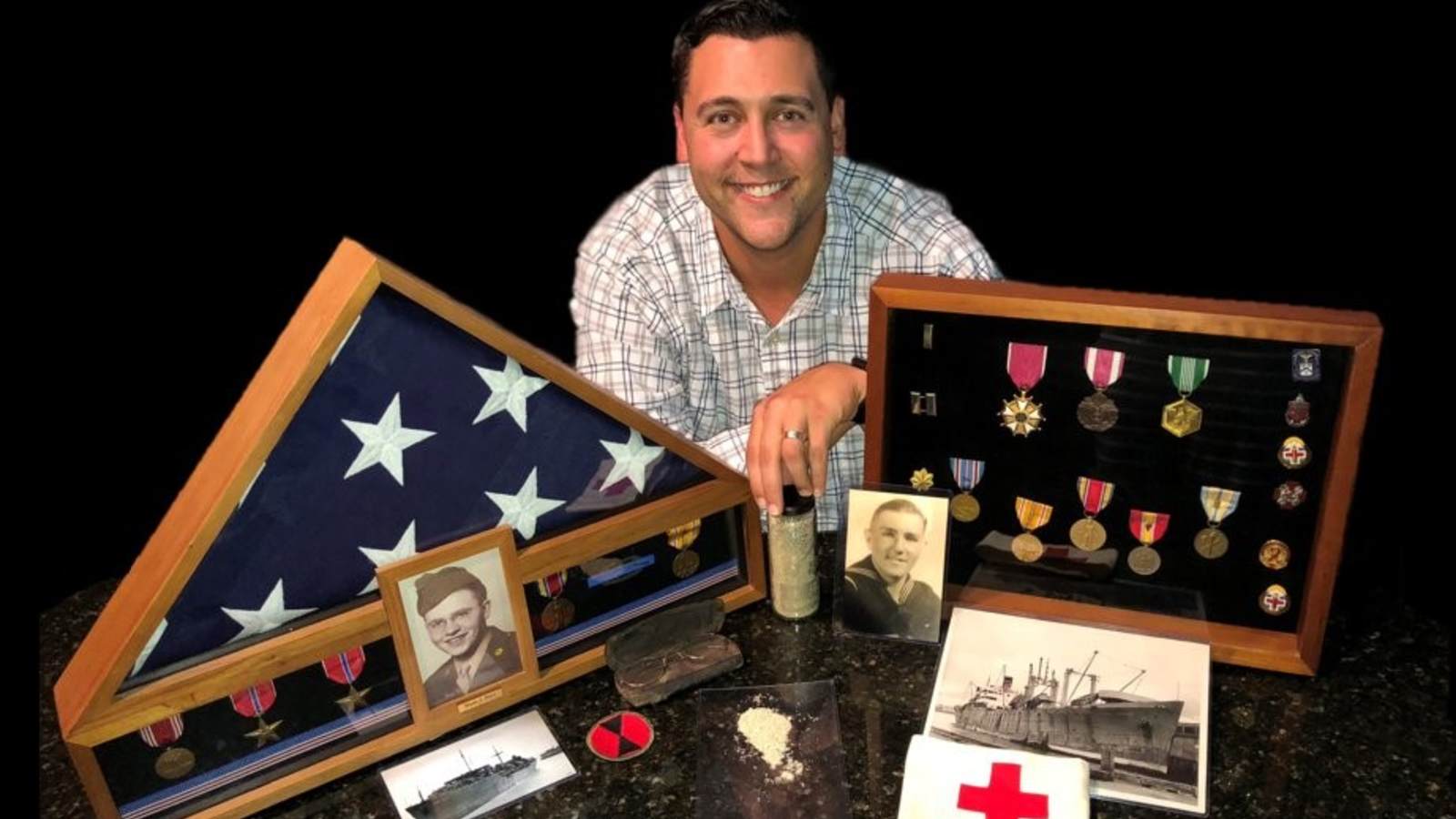 “We crossed the island fast, it was a cakewalk; when we turned south then all hell broke loose.”

Michael Hart, a Reservist with the Illinois Army National Guard, recounts the memories of his late grandfathers who served during the Battle of Okinawa.

Unfortunately, both of Harts grandfathers have passed away, but their impact on Hart was immeasurable. “They were absolutely my role models. Both had grown up with very little and lived very successful personal and professional lives; the American dream,” said Hart. The admiration and respect that Hart has for his grandfathers led him to seek a connection to them and their service that was greater and more tangible than the memories and stories they left with him.

Hart has taken on the duty of paying tribute to his grandfathers by creating shadow boxes to commemorate their great lives and service to their nation. During the creation of these shadow boxes, Hart reached out to USO Okinawa with hopes of collecting some sand from the beach where his grandfather Hart landed on April 1st, 1945.

Hart’s military service has led to countless interactions with the USO, many of which are similar to the experiences that other service members have had. However, having USO Okinawa play an integral role in connecting him to his grandfather’s service in Okinawa, is something unique and special to him, as well as something that has an extreme impact on his family.

“My grandfathers would be very proud that our family has continued to celebrate and look up to them and the events they lived through. It is my goal that their experiences, and memories, continue past my generation,” said Hart.

Having the opportunity to connect Hart to the men who had such an influential role in his life, as well as the island where they served in World War II, was a privilege for USO Okinawa, and it truly encompasses the USO’s mission of strengthening America’s service members by keeping them connected to family, home and country, throughout their service to the nation.

“As a veteran myself, having my own life shaped by events in Afghanistan, I can truly appreciate my grandparent’s experiences and understand them much more. Although I do not in any way believe I can compare to them, for me and my family being able to touch something from the place where both served and had parts of their lives changed, is extremely special. It’s a connection, and when you can hold something tangible from there, it doesn’t seem so far away either,” said Hart.

Throughout history, the U.S. military has formed connections to people, places, and experiences all around the world, and through the work of the USO, as well as the efforts of service members such as Hart, these connections and experiences are able to stay alive and be passed on for generations to come.