3,000 Celebrations and Counting: USO Okinawa Delivers for Deployed Marine on his Birthday 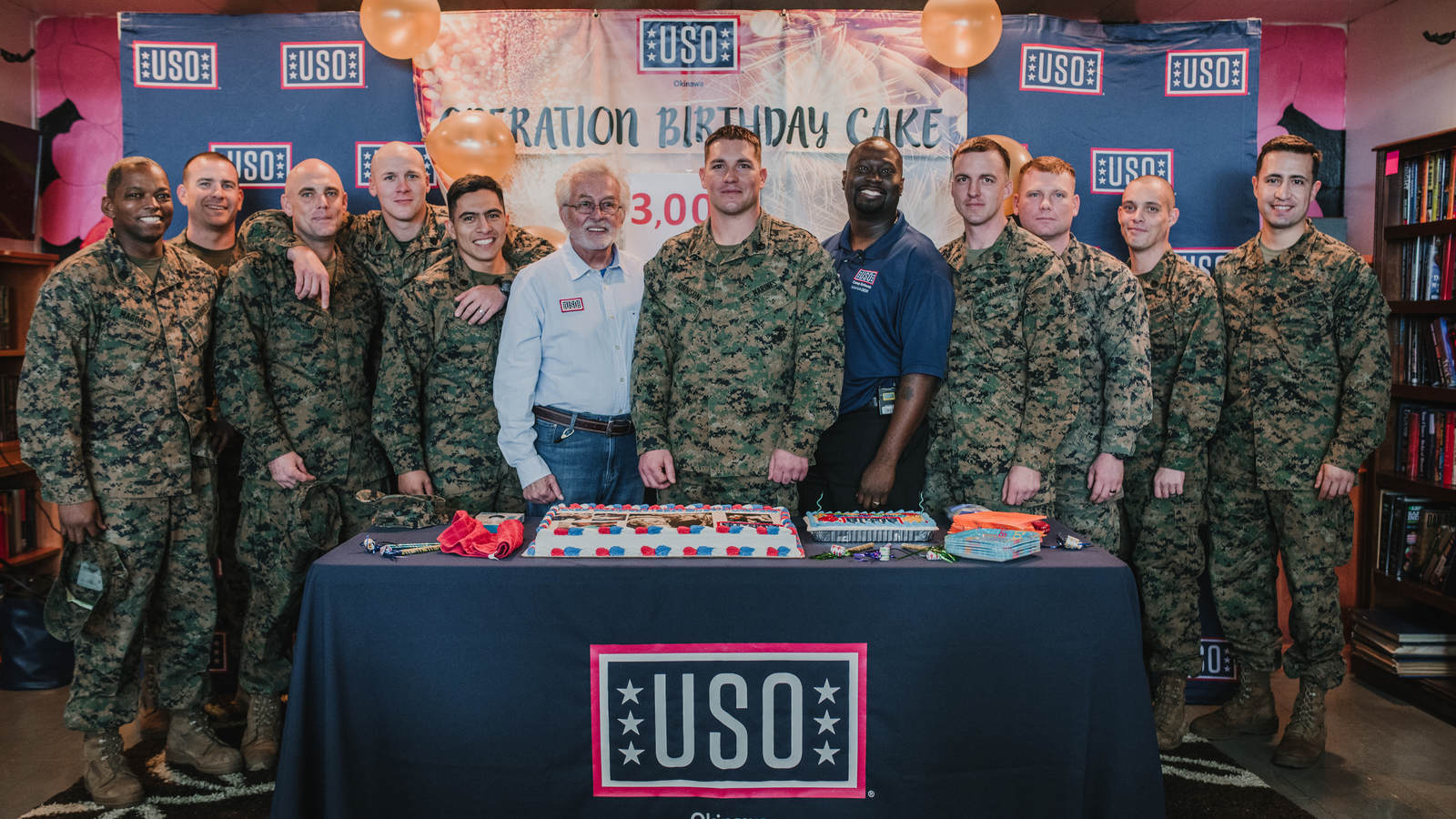 Marine Staff Sgt. Dustin Johnson doesn’t think his birthday is a big deal, but his wife Melanie and the USO disagree.

It’s a reason to celebrate.

Johnson, on a six-month deployment to Okinawa, Japan, turned 29 earlier this week. He thought he was invited to lunch at USO Camp Hansen and had no idea he was showing up to his own birthday party.

USO Okinawa, which created the hugely popular Operation Birthday Cake program, surprised the father of three with a one-of-a-kind cake and a Skype connection home to his wife and kids in North Carolina. It’s not the first time away for Johnson, who served three combat deployments before his current tour to Okinawa.

The platoon sergeant for an infantry battalion said he was surprised and overwhelmed once he realized he was at the center of the festivities.

“When I saw the cake and cameras, I thought it was for someone else,” Johnson wrote in an email. “I had no idea it was for me.”

It wasn’t just a special day for the Johnson family, either. It was a landmark event for USO Okinawa, which made its 3,000th Operation Birthday Cake delivery since starting the program in 2007. Since its inception, the program has spread to places as close as Mainland Japan and as far away as Djibouti and the U.S.

Brian White was a USO programs manager on Okinawa in 2007 when a special request from a Marine mom arrived. She wanted to know if the USO could help her get a birthday cake to her son who was turning 21 and away from home for the first time. She wanted to buy the cake, but needed someone to deliver it for her halfway across the world. White, a Navy veteran and the center manager at USO Kadena, said he would be honored to help and sent her some pictures of the surprise afterwards.

“She was so happy about what happened, she posted what I had done for her on a Yahoo Marine moms’ group,” he wrote in an email. “The next week, I received 15 new requests from mothers who had sons or daughters stationed in Okinawa with upcoming birthdays. … The rest is history.”

The thousands of deliveries since have followed a similar path. The requester fills out a form on USO Okinawa’s website with all the necessary information – including the message on the cake – and USO staff works with a unit representative and the requester to make the recipient’s day a bit brighter with a surprise cake and birthday messages from home.

Bari Wald, USO Okinawa’s area programs manager, explained that military moms make the most requests on Okinawa, which is home to thousands of Marines. Many of them are young, single and at their first duty station.

“They just want to stay connected and this program gives them a way to do just that,” said Wald, an Air Force reservist. She’s been part of many deliveries and even set one up for her husband, an active-duty Marine, when she was in South Korea on reserve duty. Sometimes the hardest part of a delivery is keeping it a surprise and coming up with a believable story to keep the birthday boy or girl in the dark.

Wald’s husband thought he was headed to a meeting at the USO. Instead, all his junior Marines were standing by to sing to him as the USO center manager presented the surprise cake.

“The best part was that I didn’t text him all morning,” Wald wrote in an email. “He thought I forgot his birthday and was really shocked with the surprise. I was happy I was able to stay connected with him on his birthday while we were separated by an ocean and military duty.”

The surprise element was especially worrisome for Melanie, who was afraid one of the kids might spill the beans during an overseas chat with Dustin, who’s missed out on a lot of special events over the years because of deployments.

“We’ve been apart for 9 or 10 [birthdays],” Melanie wrote in an email. “It’s not the same without him, so the kids and I normally just go out to eat to celebrate.”

Working together with Melanie through the process, the USO team in Okinawa coordinated a Skype call between the deployed Marine and his family so they could wish him a happy birthday and watch the surprise unfold. It’s not that same as being there, but it’s close.

On this deployment, which started in September, he’s missed Thanksgiving, Christmas and his son’s birthday. The good news is that’s he’ll be heading home soon, back to his wife and three kids, who are 14, 9 and 5 years old.

Melanie, who learned about the USO program through Facebook, said it was amazing to be able to watch the surprise take place live nearly 8,000 miles away.

“[Operation Birthday Cake] is an amazing way to celebrate your loved one’s birthday, and to just do something special for them,” she wrote. “Our service members deserve nothing but the best and the USO goes above and beyond for them.”

USO Okinawa, which has six centers on the island, averages about 50 cake deliveries a month, according to Wald. The numbers are important, but the connections to family, home and country are what the they’re really tracking.

“That’s 50 connections to family that we helped facilitate,” Wald said. “That’s 50 service members who felt a piece of home while so far away. The data isn’t just numbers, it’s people, it’s connections and it’s something we take pride in delivering here at USO Okinawa.”

White estimates that he’s made 500 deliveries over the years, so he’s seen a lot of tough men and women break character and smile ear-to-ear when he unexpectedly shows up with a cake with their name on it.

“You can be the toughest Marine or the saltiest sailor, but when your mom or dad sends you a birthday cake from halfway around the world telling you they love you and they miss you, it’s impossible not to get emotional.”

White said he loves reading the emails, thank-you cards and notes that inevitably arrive days after a cake has been delivered and a birthday has been celebrated. More than 10 years later, it still has a profound effect on him and his USO Okinawa colleagues.

“I know how it feels to be sitting in the middle of the ocean or out in the desert without loved ones on your birthday,” White said. “To know that this program connects people on their birthdays when they are on different sides of the world makes me feel like I have helped to make a difference, like I have helped to make someone’s day just a little bit better. I had no idea that it would turn into what it has today.”