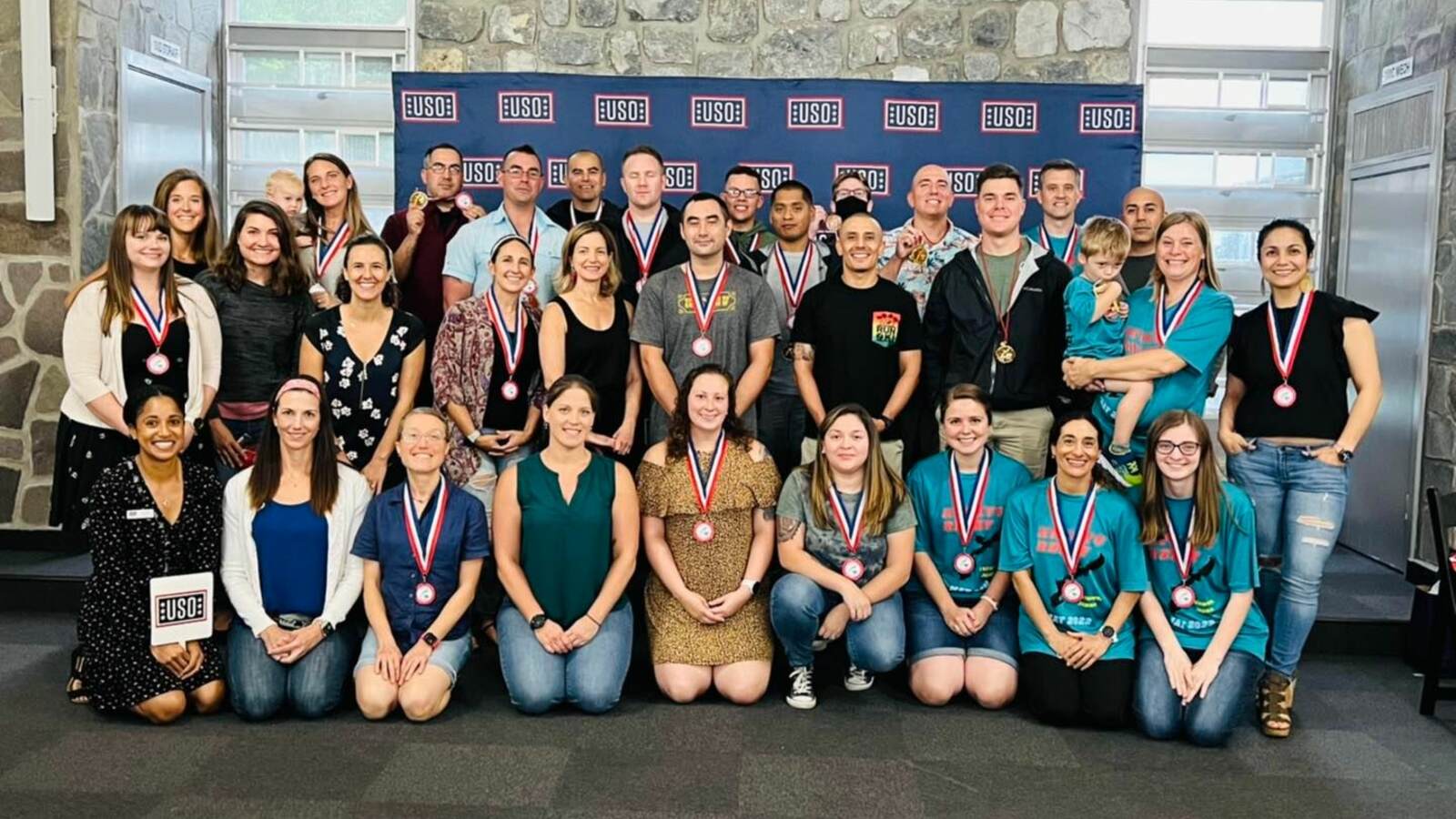 Camp Schwab, Okinawa, Japan – More than 250 runners, hikers, and walkers accepted the challenge to complete the 2022 USO Okinawa Trek and Ryukyu Relay. Participants throughout the island overcame obstacles to complete this year’s 100-mile challenge virtually, at a location of their choice, or with a team. With a 20-mile addition from last year’s race mileage and a defined course from the most northern point of the island to the southern tip, participants took part in a unique virtual race experience.

The virtual race ran for about eight weeks, allowing participants time to complete it at their own pace. Following the conclusion of the race, top finishers were announced at an awards dinner, Friday, June 3, at the McTureous Community Center. All participants were additionally presented with race medals and top finishers received engraved Ryukyuan blown glass medals. The USO Schwab team also provided a complimentary dinner, magnets, and raffle prizes courtesy of USO Okinawa sponsor, Billabong.

Those who chose the individual trek option ran, walked, or hiked 100 miles at their leisure, while those who participated with a team ran the defined course, forming groups of up to eight people, with individuals running one or more of 29 legs, within 48 hours. Leaders formed their teams and made a plan to complete the 100-mile course from Cape Hedo to Peace Memorial Park, hitting checkpoints at all six USO centers. While the additional mileage and defined course proved to be challenging enough, this year’s trek and replay participants additionally had to overcome the obstacle of a record-breaking rainy season in Okinawa. Between the eight weeks of the race, the unusually heavy rains dumped more than 14 inches of rain on the island. However, the rainy weather did not stop individuals or teams from hitting the pavement, competing for top finisher status, and completing the race.

This year’s race options provided a unique opportunity for individuals as well as teams to get out and see the beautiful island of Okinawa in a new way, during a time when some might have needed the inspiration to get outdoors despite the weather. The USO Okinawa Challenge Facebook group allowed teams and individuals to cheer one another on. It did not matter if someone was walking 100 miles for the first time, running it as a fit active-duty service member, or competing as a seasoned marathon runner. All participants joined in to cheer one another on to the virtual finish line.

The USO Okinawa Trek and Ryukyu Relay winners are as follows:

Last year’s USO Okinawa Trek was inspired by a group of four women, Amy Small, Karina Beard, Jen Hill, and Mary Tracy, who made the trek spanning the length of the island back in 2020 to combat the stress and restrictions imposed by the COVID-19 pandemic. Following the completion of the trek, Beard shared the idea with USO Okinawa and worked together to create the 2021 USO Okinawa Trek. With 100 participants for the summer 2021 trek, there were not any doubts this year’s race would be a big hit.

The Ryukyu Relay was added to this year’s 2022 USO Okinawa Trek and was the brainchild of leaders of Stroller Warriors Okinawa, Kelly Mulder, Emily Geary, Molly Mosser, and USO Schwab Center Manager, Maria Paige. During the inaugural 2021 USO Okinawa Trek, this group of leaders and marathon runners was using the trek as a training challenge to prepare for virtual versions of the Marine Corps Marathon and Boston Marathon. “It would be great if this relay race was similar to that of the relay races held in the states,” Kelly Mulder recalled saying. “What a challenge the relay would present; it would be an experience to always remember, and I know we would have some great stories to tell afterward.”

Mulder further elaborated on the inspiration behind sharing the group’s vision with USO Okinawa.

“We thought of this idea as we were running an Ultra – a 50 km run. This would be fun to do as a team, we thought. We were originally planning to do it as a Stroller Warriors run, although we really wanted to open it up to a wider audience and therefore presented the idea to USO Okinawa. I do hope the relay returns next year and people can invite their friends to participate.”

“It is nice to see everyone’s faces,” Emily Geary, Stroller Warrior member, relay course, and guidebook creator, said at the awards dinner. “This was a product of love, it is wonderful to share our love of Okinawa, and I know you all share our love because you did this race. You do not do something like this if you don’t have a love for Oki and your teammates. I hope this experience just deepened that.”

This year’s relay had a total of ten registered teams, three of which were formed by members of Stroller Warriors Okinawa. The founding relay team, Emily Geary, Kelly Mulder, Molly Mosser, and Maria Paige joined Amber DeCarli and Kristan Caruso to complete their team relay. They completed the race just behind the top finishers, turning in a time of 19:43:00.

“At a Stroller Warriors workout, we asked everyone to go around the circle and talk about their favorite running memory friends or their favorite memory on Okinawa,” Molly Mossor said. “Numerous people said that the Ryukyu Relay was their favorite!”

Richard Holguin is an avid runner and is a member of Okinawa Pavement Pounders, a popular, 12-year-old group of running enthusiasts. He supported the trek for a second year. “There is no better way to see the island than by challenging yourself to complete the USO Okinawa Trek or Ryukyu Relay,” Holguin said. “Just run a few miles with friends, you’ll see.”

Participants who compete in this USO annual event have a wide range of experience.

“I started running in Hawaii not knowing that I was going to become a runner,” Love Kapuscinski said. “Then it became a challenge to me. When I came here, I did not know if I would continue, but then I found a group that was so excellent and friendly. I love them! Running is like my happiness. I completed the Okinawa Trek by running five-ten miles each day if my body wanted more than I ran more.”

“The Okinawa Trek and Ryukyu Relay are one of the most enduring things you can do on the island,” Thomas Daly, United States Marine Staff Sergeant, said. “It is truly an amazing feat. Everyone that participated in this challenge did an amazing job. It is probably something most people will never do in their entire lifetime.”

Military leaders said they used the event to raise morale and create positive memories about Okinawa that Marines will treasure for a lifetime.

“With our operational tempo, the hand-picked team had been training on and off every Saturday morning,” USMC SgtMaj Anthony Vega – 3rd Battalion, 2nd Marines and member of the first-place relay team, said. “We were confident in our abilities and wanted to give our very best, not only for each other but for our battalion. Leading up to the race, we had several issues with logistics. We could not “crack the code” on how to move the entire team efficiently across the island. In the end, we found that it took an entire village to raise the team.”

“We had volunteers from across the battalion willing to serve as drivers, so we split up in several teams and assigned race legs according to skill levels,” he said. “The team came together on game day and performed on a whole other level; it was complete eudemonia (happiness). The overall energy and camaraderie we built as a team as we traversed the entire Okinawa Island will remain unmatched- I am extremely proud of our team and what we accomplished! The USO 100-mile relay race was an absolute blast and is an event that should be on everyone’s Okinawa bucket list. Thank you again for such a phenomenal experience!”