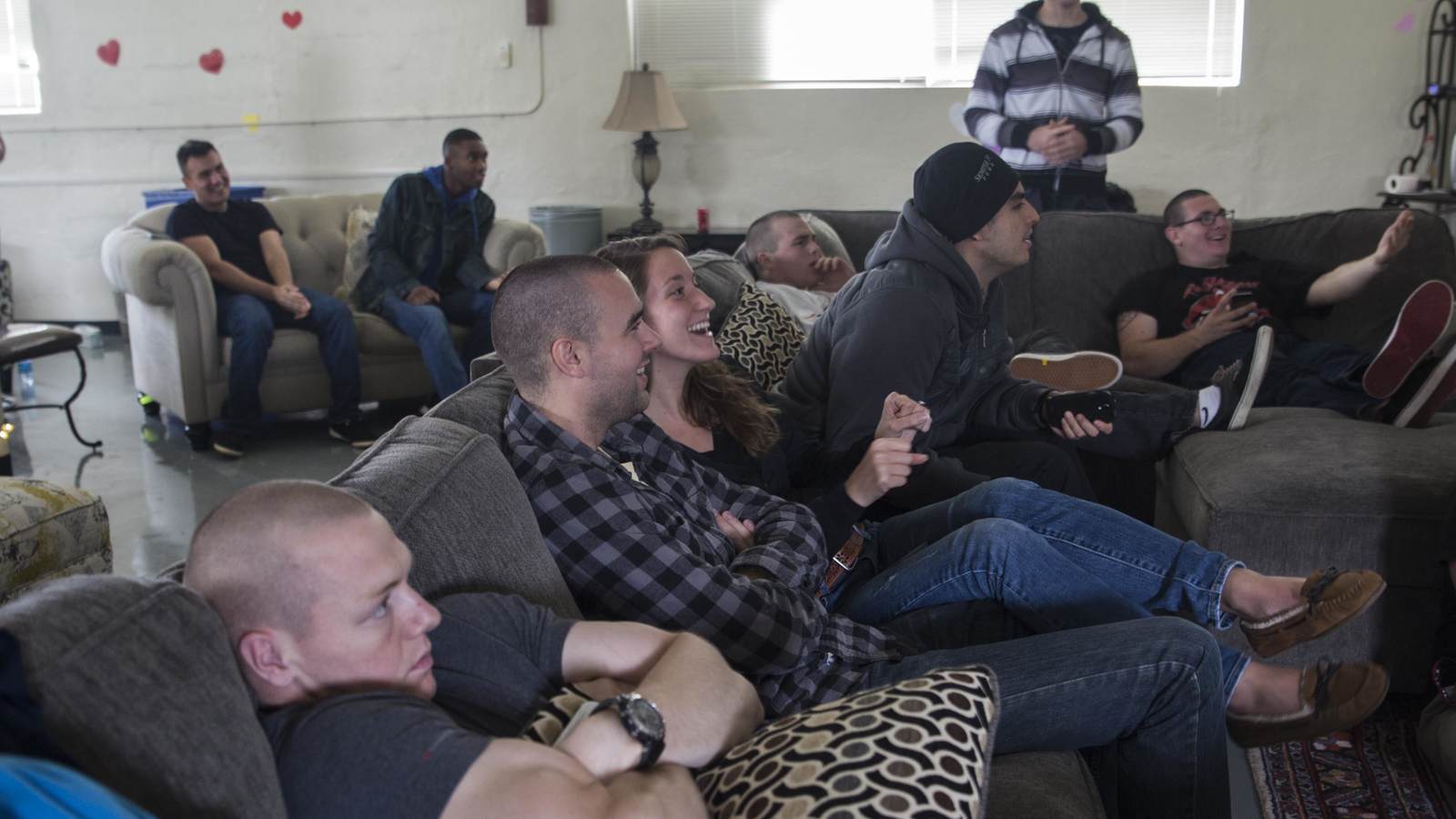 CAMP FOSTER, OKINAWA, Japan — Marines and sailors shout with joy or yell in agony at every big play on the TV screen. If their team scores, they jump and clap hands. If their team makes a big mistake, they sit in disbelief. Throughout it all, the USO staff pass around pieces of cake as they all watch the Super Bowl game together.

The Camp Foster USO, among others across Okinawa, celebrated the 74th birthday of the USO’s creation in conjunction by throwing a Super Bowl party Feb. 2, as the New England Patriots competed against the Seattle Seahawks for the championship. The staff cut a cake decorated with the letters “USO” in bold red, white and blue frosting and served it to visitors to commemorate the Feb. 4 birthday.

While the USO staff also served grilled cheese sandwiches and sausages, the cake was the main meal in spirit of the birthday, and the rest was a little extra for the troops, according to Andrea Holt, a program coordinator for the Camp Foster USO.

“The USO gives me a chance to give back to the troops who are serving their time away from home,” said Holt, from Okinawa. “It makes me feel like I’m doing something for the troops. They can imagine me as their sister, their mother, whoever, while I’m serving up breakfast.”

The USO was founded Feb. 4, 1941 by President Franklin D. Roosevelt. The 32nd president created the USO to combine several organizations that supported the troops at the beginning of World War II. These agencies were consolidated to provide morale, wellness and recreation to war-weary troops. Since then, the USO grew to provide a broader range of services to Marines and sailors when away from home.

“I work with the USO on a daily basis, and it’s a draw for me that they support the Marines,” said Audrey Mills, a native of the Philippines and family readiness officer with 3rd Marine Logistics Group, III Marine Expeditionary Force. “They’ve affected the spirit of the Marines, especially here on Okinawa. I’ve been a FRO up on Camp Schwab, and the Marines go to the USO to relax and have fun. That can be hard to do in a place that’s high tempo and fast paced without a USO. ”

For many years, Marines have always felt at home when at a USO, according to Lance Cpl. Luis Guerrero, a Super Bowl party attendee and finance technician with Combat Logistics Regiment 37, 3rd MLG, III MEF.

“I come to the USO very often — I love the USO,” said Guerrero, a native of Chicago. “It only seemed fitting that out of all the places I could go to for a Super Bowl party, it’ll be the USO I pick. (They’ve) always been there for birthdays and holidays. They’re always doing something new and making the troops feel comfortable.”